LED Screen vs Video Wall: What Are The Differences & Which To Choose

We love large displays. Whether it is a home TV, a PC monitor, or a theatre screen, the feeling of watching movies or videos on a big screen is truly magical. A larger screen helps to deliver content and convey messages more effectively. Many businesses understand that a large screen attracts viewers. As a result, when traditional billboards and signages are hard to get attention nowadays, more and more businesses turn to using digital displays.

The two most common large-screen displays in the market are LED screens and video walls. Both of them are widely used in various applications such as retail advertising, exhibitions, trade shows, and conferences. However, thanks to the fast-evolving display technology for the past few years, as a newcomer to the market, LED screen is getting better and better in almost every aspect. Businesses start to question, whether an LED screen is a better option than a video wall. 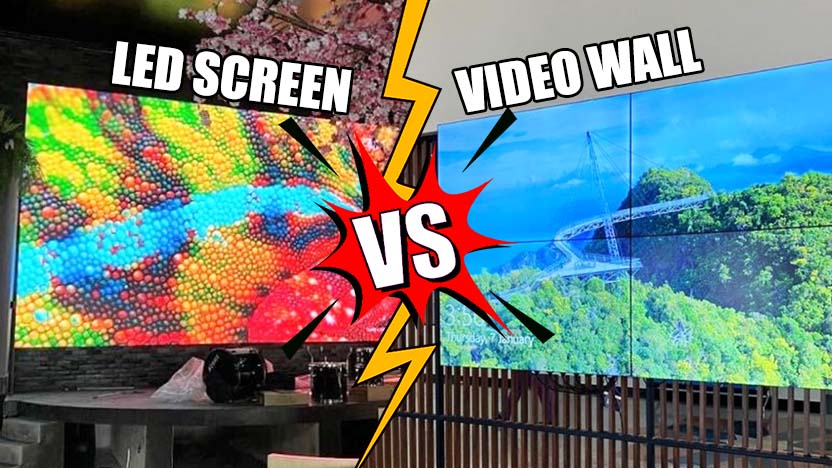 In this article, we will look at the differences between LED screens and video walls. We will also explain which display will be a better choice when it comes to different scenarios or applications. Before we dive deeper, you need to understand what exactly a video wall and an LED screen are. A video wall is not exactly an out-of-box product. It is a customized multi-screen setup that resembles a large screen by combining or tiling multiple smaller LCD screens or monitors together.

For example, when a 55-inch LCD display is not large enough to meet your need, instead of buying a heavy and bulky 110-inch display, you can also tile four 55-inch displays together to form a larger screen (110-inch screen size).

In addition to the multiple smaller displays, the setup also needs a video wall processor. It is used to control what content is shown and how it is displayed. From different content on different displays to full-screen content that is stretched across all displays, the processor is crucial for the users to manage the content in real-time. LED screen is a direct-view display that is built by using multiple LED modules or panels. Unlike video wall which has a covered front glass on each display, there are only a large amount of LEDs or light-emitting diodes on each LED panel. Light-emitting diode emits light when electric current flows through it.

Appearance-wise, the seams between LED modules are generally invisible. On the other hand, obvious bezels can be found on a video wall. A 2-storey tall Indoor LED Screen at a shopping mall. Closer look at the surface of an LED module.
Each tiny LED chip or pixel on the module contains a red LED, a green LED and a blue LED.

Video walls and LED screens utilize different display technologies. It is the most important area to talk about as most pros and cons of these displays are generally determined by the underlying technologies.

LCD or liquid crystal display is a technology that uses a layer of liquid crystal material that is sandwiched between two electrodes on glass substrates. Since it cannot emit light on its own, it needs a backlight. LCDs are commonly used in home TVs, computer monitors, and digital signages. It was introduced many decades ago to replace CRT displays that are thicker and bulkier.

On the other hand, LED technology uses light-emitting diodes that can emit light on their own. Since LED technology is not relying on any backlight, it can achieve a perfect black level by simply turning itself off. As a result, LED can produce images with a greater contrast ratio.

In terms of display brightness, the LED screen is also a clear winner. It has a higher nit value than an LCD screen. A nit is a measurement unit that is used to represent the brightness of the light.

In a nutshell, LED screen beats video wall in almost every aspect of visual quality. Whether it is the black level, brightness, colour accuracy, and contrast ratio, the video wall is clearly not a match.

An LED display does not need any backlights. The LED lamps can emit light on their own.

Technically, there are no size limitations for both LED screens and video walls. However, there are other factors that you need to consider if you want to go for an ultra-large screen. These factors include the weight load of the wall or installation structure, budget, project deadline, and the performance of the video processor.

For video wall, the larger the screen size, the higher the number of displays. When you want to display a synchronized and full-screen picture spanning across all displays on a video wall, you will need a very powerful video processor.

On the other hand, LED screen provides more flexibility in terms of shape. It is easier to have a customized shape due to the smaller size of LED modules. Besides, LED modules of various shapes such as triangle, rectangle and square are available in the market. There are also bendable LED modules that can help to create spherical and cylindrical shapes. Flexible LED module that is bendable. It can be used to form a Curved LED Screen. LED Screen with a unique shape.

For example, let’s say you want to build an LED screen with a size of 4.8 x 2.7 meters. If you are using the P2.5 LED modules, you can get the Full HD resolution. However, if you use the P2 LED modules, you will get an uncommon screen resolution of 2,400 x 1,350 pixels.

Video wall is strictly for indoor application only. Installation for both LED screens and video walls follows a simple principle. The larger the screen, the longer the installation time takes. However, when a comparison is made, it is obvious that the time to install an LED screen is a lot longer than a video wall installation.

An LED screen installation involves multiple processes that need to be carried out carefully. The traditional approach involves both installations of LED modules and the frame. The frame is a specially designed structure that holds the entire LED screen. It needs to be installed first before the power supply, sending cards, and LED modules can be installed.

During the installation of LED modules, the flatness of the screen has to be monitored carefully. Uneven screen surface is intolerant. Besides, all LED modules have to be aligned and fitted on the plane without any gaps. The fact that there are more LED modules compared to the number of LCD displays on a video wall is one of the reasons why it takes longer time to install an LED screen. During the process, the configuration also has to be tested several times to make sure there are not any operation errors. However, you must also pay attention to other factors such as heat dissipation, quality of power supply, and content usage to ensure a healthy lifespan of the LED screen.

When there is a faulty issue with the display, it is easier to replace a smaller LED module than replace a larger LCD display.

When one of the four LCD displays within the video wall is malfunctioning, the entire display has to be removed for repair or to be replaced with a new display. Since the 2×2 video wall has only three remaining displays, it is almost impossible to keep the video wall running as the content is not viewable at all.

On the other hand, you only need to replace a few faulty LED modules for the LED screen. Since the LED modules are smaller, the repair or replacement cost is lower when compared to replacing a 55” LCD display. Besides, the LED screen can continue to display content even if one or two modules are removed. The affected modules or screen areas are not large enough to affect the entire viewing experience badly. When it comes to cost, the video wall is definitely the ultimate winner. A video wall is a budget-friendly solution due to the maturity and adoption stage of LCD technology. LCD technology has existed for at least two decades and the manufacturing cost is pretty affordable nowadays.

On the other hand, LED screen is indeed more expensive than most digital displays in the market, including the video wall. However, businesses should focus on the return on investment. It is not the cost that defines the success of a campaign. It is the result that matters the most.

11. Which to Choose: LED Screen or Video Wall?

It is pretty easy to choose whether to invest in an LED screen or a video wall.

If you are looking at an outdoor application, choose an LED screen.

If you are looking for a superior viewing experience with higher brightness and more accurate colours, choose an LED screen.

If you have a limited budget, choose a video wall. However, although the upfront cost of a video wall is lower, the maintenance fee in the future could get pretty high if you are unlucky. As a professional solution provider with years of experience, we understand that different businesses have different requirements and scenarios. While it seems LED screen is a clear winner and the only advantage of the video wall is its upfront cost, other factors can affect your choice of investment.

Feel free to talk to us, and we will suggest the most suitable solution that meets your needs.

Top 4 Benefits of Renting An LED Screen For Your Event

Content Is More Important Than Any Display or Channel

How Property Developers Use Digital Displays In Their Sales Galleries

What Is An Ultra-light Outdoor LED Display

Hello! WhatsApp us, or send us an email to [email protected] 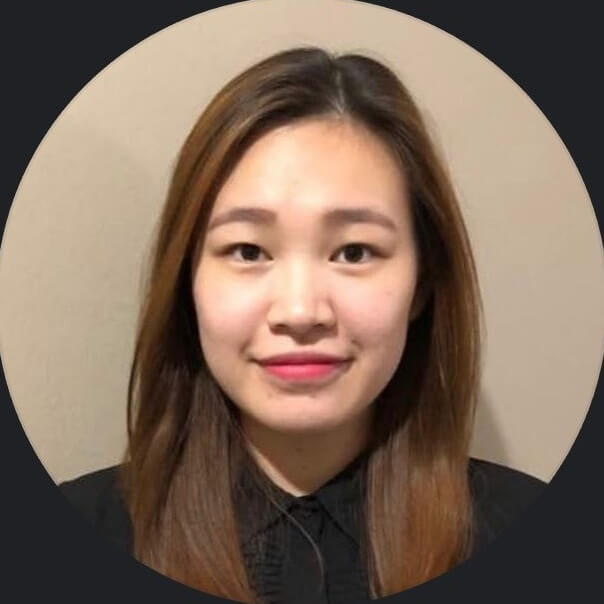 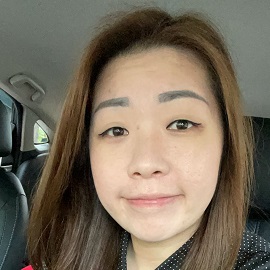 LED Screen & Others Ms. May (012-2399228) Available on SundayMondayTuesdayWednesdayThursdayFridaySaturday